Altis (アルティス, Artis?) is a demon reborn as an angel because whenever she tried to do something evil, it turned out as something good, and because of this she still has one demon wing. Altis wishes to become a demon again and will often try various schemes and plots to "attempt" to be evil, though this backfires most of the time and ends up causing her to do good more than evil.

The story starts off with Altis wondering in space as she recently got booted out of the netherworld and "promoted" to an angel.

She see's Chou Chou sleeping and wonders what a girl is doing in the middle of space and goes to greet her and check on her. They shortly encounter Ryuto in which afterwords Chou-Chou peons him and declares world domination. Altis then decided that has to be a great act of evil in that would which make her a demon again so she and Chou-Chou set off for the seven worlds.

Altis sings the intro song with Chou-Chou when the game officially starts.

Altis is introduced alongside Chou-Chou, Ryuto and Belleria at the start of the game. She is later dropped off onto Violet World, where she meets Kakeru and is persuaded to don a magical girl outfit and play the role of the "Evil Masked Beauty Altalt-tistis". When the group finally arrive on Violet World, Altis denies being their traveling companion out of worry of the humiliation she would receive if Chou-Chou found out she was wearing such an embarrassing costume, though all the other party members are able to see through her paper-thin disguise. Altis (Altalt-tistis) eventually goes so far as to claim that she killed the real Altis, enraging Chou-Chou and Kakeru to the point where she's forced to defend herself against them and the rest of the group who are forced to play along. Though Altis steals Kakeru's airship and uses it against the group, she still falls and is ultimately backed into a corner. Unable to return to Chou-Chou's side, she's eventually saved by Ace and is forced to tag along with him until the final battle, where she reveals that she (Altalt-tistis) was actually Altis all along. Only Chou-Chou and Kakeru are ever fooled by her charade.

Altis never gets the chance to reveal herself in the Normal Ending, forcing her to sneak around the G-Castle forever until a chance arises.

In the post-game of the True Ending, Altis is playable once again.

She has a yellow halo on top with long light green hair in a ponytail tied by blue ribbons and a black hair band, pointy demon ears and has blue eyes with a cross for each pupil, representing how "angelic" she is. There is a Atlis wears a short top and mini skirt with a pair of tri-spiked bracelets.

She actually has 3 wings but only 2 are displayed on screen while the other 1 are shoved down into her mini skirt, and belt.

In her Altis Diary temp, her hair is untied and she wears nothing but a dress shirt.

Her personality is rather sadistic as she enjoys watching trouble unfold and trying to cause it. Though despite all that she is rather close to Chou-Chou and agrees with most of her methods. They even sang together in the opening dance movie to the first game.

As Altalt-tistis, she wears a purple bow and mask to hide her identity. She has no hairband. She wears a white and purple outfit similar to that of a magical girl with white gloves and purple boots. She is often seen holding a magic wand.

She uses guns in battle, when further improved she can also use bazookas and scythes.

Her skill + is promenent in TEC (cross-hair symbol), INT (double squares and a dot symbol) and Sadist (fire).

Altis is fought as a boss on Violet World as her alter ego, the Evil Masked Beauty Altalt-tistis. Upon Item killing her, Syrma gets the following:

Special Skills Description: Altis first leaps up all the way to outer space while simultaneously summoning a spiked arm cannon. Following this, she shoots out a turquoise energy sphere from above. A scene shows that the moon was about to get hit by a meteor, until the energy sphere altered its direction to Earth. The attack finishes off when the meteor created an impact, and obliterating the target. Though she wanted to destroy the moon, destroying the planet was all right for her. 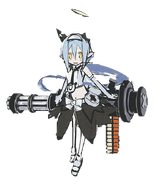 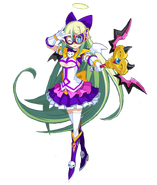 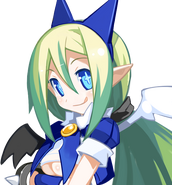 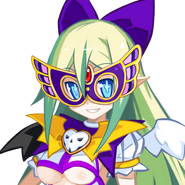 Altalt-tistis Linked Skill cutin
Add a photo to this gallery
Retrieved from "https://mugen-souls.fandom.com/wiki/Altis?oldid=21658"
Community content is available under CC-BY-SA unless otherwise noted.