Nao is the Hero of the galaxy in Mugen Souls Z. She is introduced as an adventurer searching for the legendary weapon on Rose World. Nao finds a hidden area and stumbles upon a coffin hoping to find what she was looking for. Instead she finds Syrma and they become allies in combat. The pair form a comical relationship of "the idiot and the brains" as she gets quite annoyed by Syrma's unwillingness to do work.

Like other character designs in Mugen Souls, some of the accessories look like they resemble the inifinity sign or an "X" shape. The color of her outfit and design is similar to Chou-Chou Sadist. She wears a pair of black shorts with a red pirate-like cape around her waist and a tank top. Nao has a long ponytail that goes along with the large ribbon. Her height is about the size of an adult female. She has orange hair and blue eyes.

Her tolerance for foolishness and wasting time is very low, she is very serious towards completing objectives and focuses only on what is important. Nao often babysits Syrma and leads the party back on track whenever she begins to slack off since their priorities are opposite.

Even though she is hates it when people mess around and get side tracked, she begins acting like a child getting a new toy when the subject involves finding the legendary weapon.

She seems to have a small crush on Soul, due to his heroic characteristics and personality. However, it did not last long, as Soul revealed his swimsuit fetish to Supra (and unintentionally, most of the newer party members).

The only time she uses the Ultimate God weapon is when she performs her Unique Special Skill "Ultra Twin Blade Slash".

Nao starts of by summoning her Ultmiate God Weapon, and combining the two blades into a scissor blade. She sends out a vacuum blade in a shape of a X by clipping her scissor blade at a lightning speed. She then separates her scissor blade into dual blades, closes in on her opponent, and performs multiple quick slashes and a greater spin attack that performs numerous hits. As the wind from the assault clears, the opponent is engulfed in a minor explosion.

If Nao uses this skill before she has the Ultimate God Weapon, she will summon swords that, when merged together, look like a giant pair of regular scissors.

Nao is fought as a boss on White World. If Nao is Item Killed, she drops the following items: 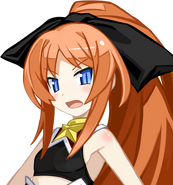 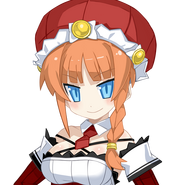 Seen when clearing the medium difficulty game on the Japanese website.
Add a photo to this gallery

Retrieved from "https://mugen-souls.fandom.com/wiki/Nao?oldid=22368"
Community content is available under CC-BY-SA unless otherwise noted.