"Amazing, as expected of Lady Chou-Chou! I'll follow you to the edge of the universe!"

Ryuto (リュート, Ryuuto?) is the vassal of Chou-Chou, the owner of the G-Castle, as well as the hero of Soil World.

Ryuto is an average-sized kid or teen, and might possibly be the youngest male of the group.

He wears peon style clothing and shoes (shampuru based) mostly yellow in colour, and has blue hair with goggles giving him the "pilot look"

Ryuto was piloting the G-castle when he found Chou-Chou in the edge of the universe and finds them and thinks they are stranded in then he offers them a ride Chou-Chou wants his ship he refuses and Altis calls her a bit crazy.

So then Chou-Chou then says "I'll make you mine" afterwords Ryuto becomes her first peon. His ship then belongs to Chou-Chou.

As Chou Chou's vassal, he doesn't mind the labor as long as if its her orders. (Hence the reason that his moe type is masochist). He can be seen as the "punching bag" of the crew, often taking abuse from a few characters which displeases him. Like his fellow heroes of the Seven Worlds, he holds a few common aspects a hero can muster. Despite being away from Soil World for quite a while, Ryuto is highly protective of his home planet to the point of taking on Vorgis in order to avenge its fall. He is also shown to be self-conscious about his title, as seen when Nao stated that he looks more like a kid (servant in English version) rather than a hero, much to his dismay. He gets the most nosebleeds in few of the main events and the hot spring events, indicating that he has a perverted nature.

Knuckles are his primary weapons. By furthering his skills, he can wield gloves and spears.

Ryuto functions as a speedy tank in battle, having the second highest HP growth out of all characters and an impressive agility and vitality. Although his physical attack power is mediocre, he can still incapacitate or dish out heavy damage to weaker enemies. His mentality is average, but his magic is supposedly low which makes him heavily reliant on attacking at a close range. Furthermore, his SP is the complete opposite of his high HP, thus players have to make their choices wisely.

Ryuto summons a greatsword from his hand and charges at the enemy. Ryuto then impales the target with his greatsword for a few seconds before releasing it (possibly because his ultimate technique is too overwhelming for him to fully utilize with care). As the enemy take damage from the friction, the attack finishes in a similar manner like Seven's Impact: exploding in a brilliant, colorful light. In Mugen Souls Z, Ryuto's special skill has an added animation. After summoning his weapon, he begins his attack by slashing the target a few times, before performing the same stabbing attack from the last game.

Ryuto is the hero of Soil World.

He is often scared when new things happen and tends to get a bleeding nose when things get even slightly sexual themed.

He was the owner and still is the pilot of the G-Castle.

It seems like Ryuto can communicate with the Shampuru.

During the final chapter, Ryuto reveals that, ll along, he had the seventh and last fragment of Chou-Chou's blue gem. This fragment contained the reason why Chou-Chou and Belleria fought in the first place: Vorgis was devouring Chou-Chou's world.

Ryuto serves as Chou-Chou's constant companion throughout the entire game. 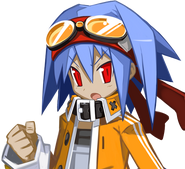 Ryuto Linked Skill cutin
Add a photo to this gallery

Retrieved from "https://mugen-souls.fandom.com/wiki/Ryuto?oldid=22353"
Community content is available under CC-BY-SA unless otherwise noted.