Syrma is the main character the player controls in Mugen Souls Z. The role she has in her Galaxy is the successor of the Original Ultimate God. Syrma has a very strong bond with a coffin she carries around. She takes the coffin with her everywhere. She will even sleep inside it.

Syrma has a medium bust and average height. She has long blonde hair which can reach down to her feet. The tips of her hair are white. She has blue eyes and pointy ears. Her outfit is blue and it consists of three hair accessories, thigh high white socks and blue shoes. There are also rose hearts on the center of her outfit. On her back is a heart-shaped pouch with the sign of Virgo on it.

When Syrma changes her appearance, due in part of absorbing Chou-Chou's powers, she dons the outfits and haircolors of Chou-Chou's seven other selves, but still retains her personality and eye color.

Despite having her type of Moe labeled as Ego, she is anything but selfish, she's more of an airhead. Even though she is the character the player controls, Chou-Chou is the one who is giving all of the orders and leads the party since she is the one who has a plan as well as many peons to serve as her scouts.

Syrma is laid back, likes to take breaks and is very carefree. She often forgets her objectives because all she can think about is resting, she can even take naps in broad daylight. Syrma often says stuff that angers Chou-Chou such as calling her cute and small often resulting in even more losses of brain cells since that is the spot where Chou-Chou mostly resides.

As Syrma continues traveling the Twelve World Galaxy, she become disturbed on how she was the only one of the Ultimate Gods to have a specific duty, while the other just do whatever they wanted.

After fighting Tioni for the first time,and absorbing Onluka's powers and memories, she become to avoid thinking about the issue and take more on each world to delay the fact that she may have to destroy a little girl to the save the Twelve Worlds.

They venture off and stumble upon a rival party which happen to be Chou-Chou and Ryuto. Nao and Syrma lose, then Chou-Chou gets curious and wants to take the coffin. Syrma warns Chou-Chou to not take it because it's dangerous as well as it also being her prized possession. The coffin snatched Chou-Chou and absorbed all of her abilities but did not return her in her original state that Syrma claims was a malfunction.

After the fiasco, they settle down in the hot spring and become good friends. Chou-Chou and Syrma both have similar Goals, Syrma wants to absorb all of the Ultimate Gods on this Galaxy so she can get the rest of her powers back and Chou-Chou wants to subjugate each world by making the strongest being her peon. There is no way for Chou-Chou to conquer anything in her current state and Syrma is too lazy with not many material support so teaming up would be the best choice.

Chou-Chou blames everything on Syrma and as penance makes her the one responsible to take care of her. Chou-Chou is not even able to keep up with the main party on foot because the legs on her new body are too short so Chou-Chou must rely on riding on Syrma's head to get around.

Most of Chou-Chou's powers are lost and Syrma does not even know how to use it and she will give explanations of the Undisputed Goddess' power. The only power Syrma has not received was the power to change her form completely but is still able to change her outfit and Moe Affinity. Therefore Syrma also has to rely on poses the enemy may have a fetish for as well in order to captivate them. Chou-Chou on the other hand can still change forms but remain in a tiny body. 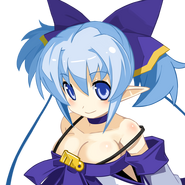 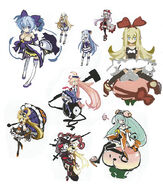 More of designs that were rejected.

♫ Little ChouChou on my head ♫
Add a photo to this gallery 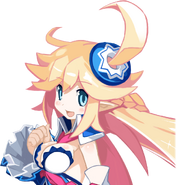 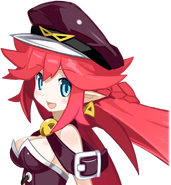 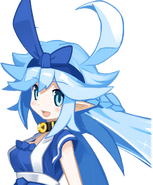 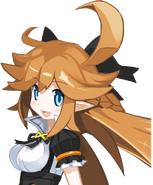 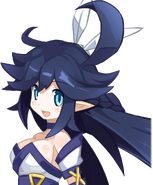 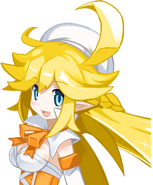 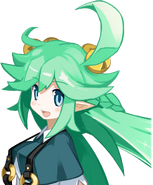 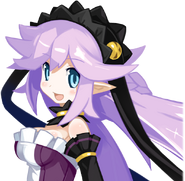 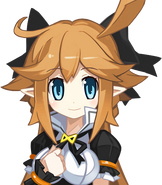 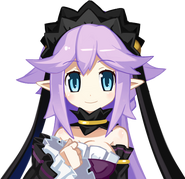 Add a photo to this gallery

Add a photo to this gallery

Retrieved from "https://mugen-souls.fandom.com/wiki/Syrma?oldid=21861"
Community content is available under CC-BY-SA unless otherwise noted.